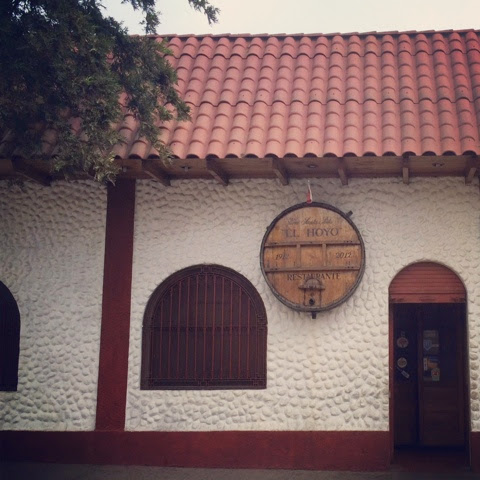 I did enough research to know that I want to eat at El Hoyo, a name that means 'the hole' as in, a hole in the wall. First off, Anthony Bourdain went there so that alone has me interested, I won't lie. I wanted traditional food and an authentic dining experience. We walked 3.5 miles from the hotel to El Hoyo. From what I heard about the food, I knew that walking there would eliminate some of the guilt of eating the monstrous portions we were about to indulge in. Santiago is the safest city in South America so walking was an enjoyable experience. Except when we hit the halfway mark and I started to wish we were there already. So lazy.
We arrived on San Vicente, a quirky residential street with multiple pastel colored houses and a bright purple building sticking out in the neighborhood sky. Down the street was a cute cantina, more quaint than I expected, with wine barrels decorating the facade. We sat inside, and were served by Anthony Bourdains waiter. Good start already! The bread basket arrived, it was crunchy and delicious with the super spicy salsa. We ordered a pitcher of Terremoto, it means earthquake and it's a mixture of wine called pipeño mixed with pineapple sorbet. Our waiter mixed it table side until it was frothy. It tasted sweet but it packed a punch, as I slowly noticed my cheeks getting hot from the alcohol. 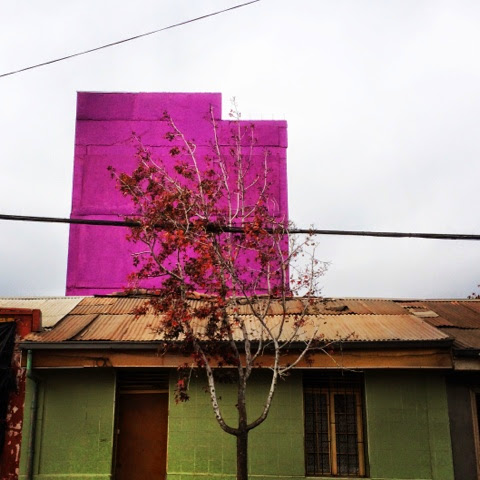 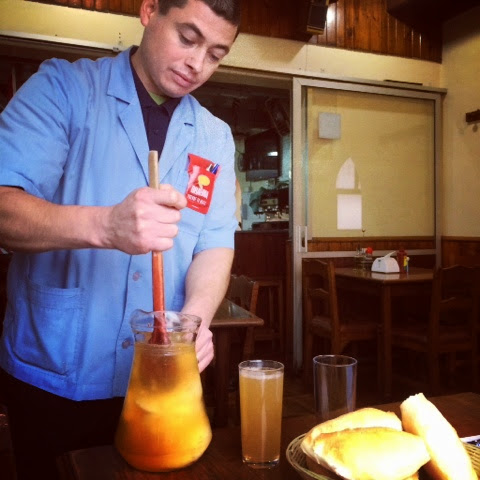 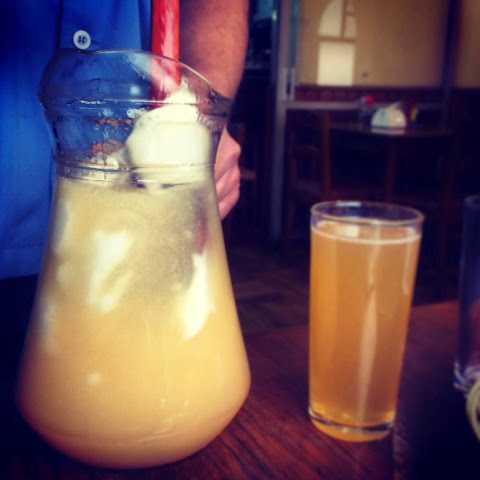 We ordered the arrollado and the pernil. The arrollado is a unique dish made from marinated beef bits rolled up in pork skin, then cooked in a loaf and sliced. Honestly, I was disappointed when I saw it because I thought it looked like mystery meat bits in a lard roll with boiled potatoes. I also heard that Chilean food can be bland so I wasn't sure what the taste would do for me. I was blown away by how flavorful and tender the meat was. Best meal in Santiago hands down. Aside from the skin and the bits of fat, it was incredible! The locals ate the fat and skin but I wasn't ready for that. The pernil is pork shoulder. It also looked barbaric and bland on the plate with boiled potatoes but again, it blew us away. The skin trapped in all the juices of the meat and it literally fell off the bone. We were so disgusted with ourselves afterwards for cleaning our plates but this was a meal that would go down in history. 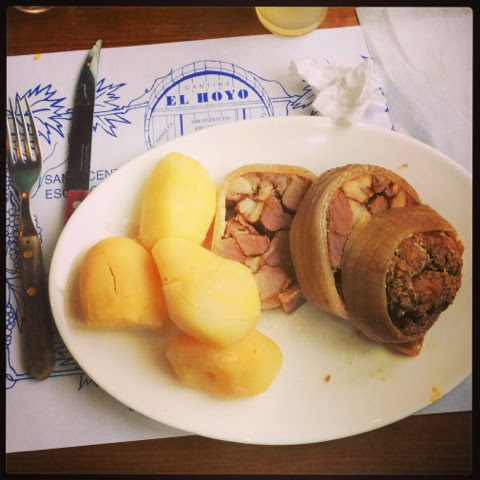 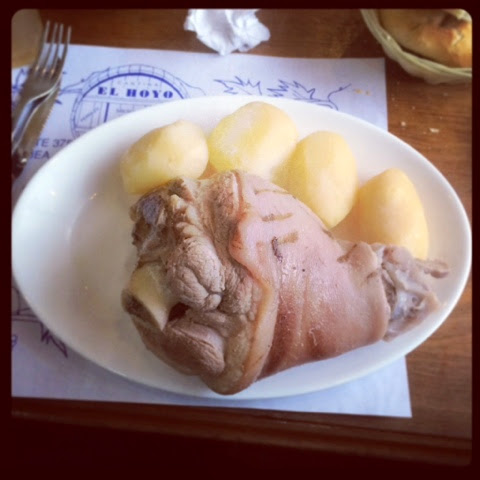 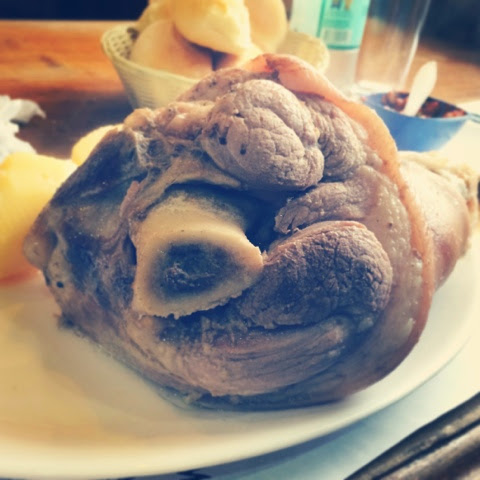 Posted by JackOfAllTravels at 5:16 PM No comments:

I found an area four blocks from Loreto Hotel called Barrio Bellavista. It was filled with restaurants and bars. At night it was busy, even on a Monday. We found that some restaurants seemed touristy, and some seemed more authentic. Regardless, the only people we ever saw were locals. We were the only NORTH Americans in sight. We had a beer on a busy street of restaurants called Constitución, at a corner cantina called Ciudad Vieja, with a library of beer and wine behind the bar. The bartenders would swing across the shelves on the ladder to get the beers requested. We didn't eat here, but I would if I had more time in Santiago. The tables around us had huge sandwiches (like the lomito) with piles of avocado. 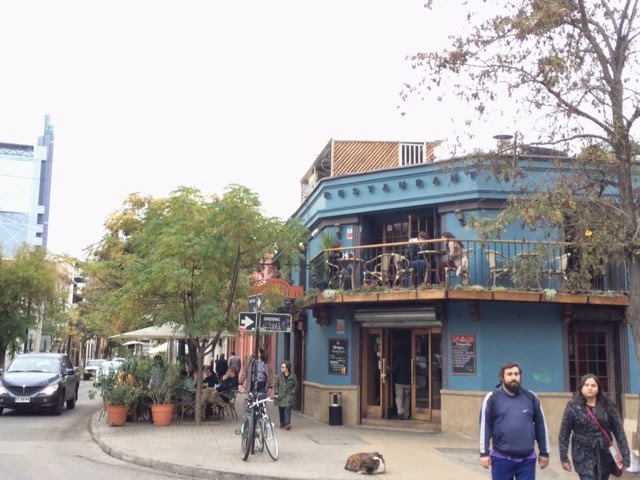 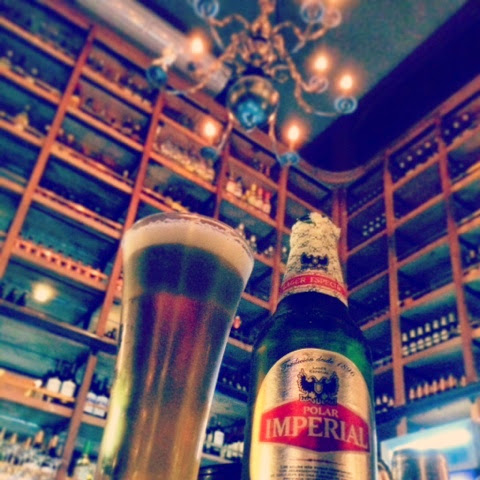 Across the street we ate at Galindo on Calle Dardignac where there was a bit of a wait. We don't mind a little wait time when we travel because it usually means the food is worthwhile. A guitarist was playing music on the corner while two stray dogs barked wildly at cars driving by. It was more than enough entertainment for us foreigners. We were seated outside and ordered the house wine and an empanada to start. It was the highlight of the meal. The dough was crispy and filled with beef, onions, egg, olives, and raisins -- a combination of food I would normally heave at, but it was perfectly sweet and savory. 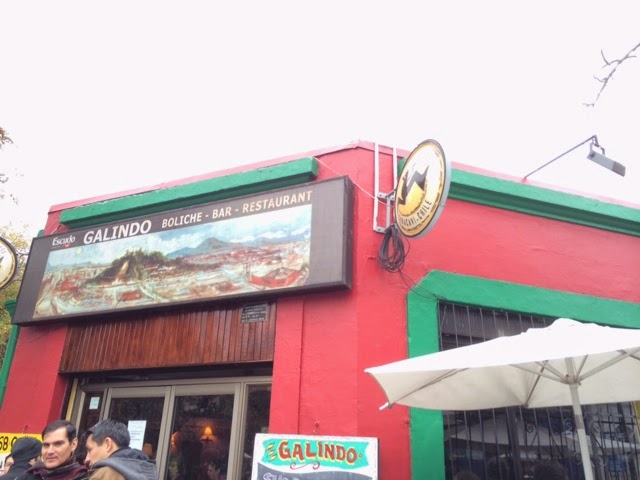 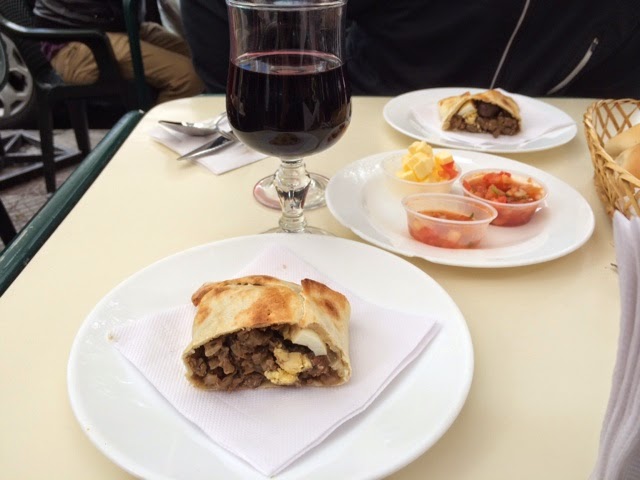 The main courses arrived in huge portions as we soon realized is custom in Santiago. We had the corn pie with all the fillings of the empanada in the bowl. The corn pie came with a sugary crust on time. It was so rich, a bit too rich for two people to finish it all. The seafood soup was no joke. It literally looked like there was a piece of every species of sea creature in this one bowl. Some chunks had scales, some were mysterious, and I even found a barnacle with whatever barnacle meat is hanging out of it. The broth was fishy like Rockaway Beach, nice and warm on this chilly autumn day. Next time I'll pass on the soup but the rest of the food was straight hearty comfort food! 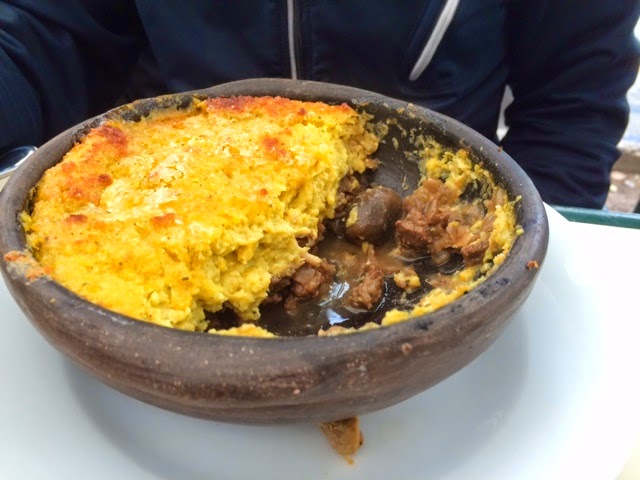 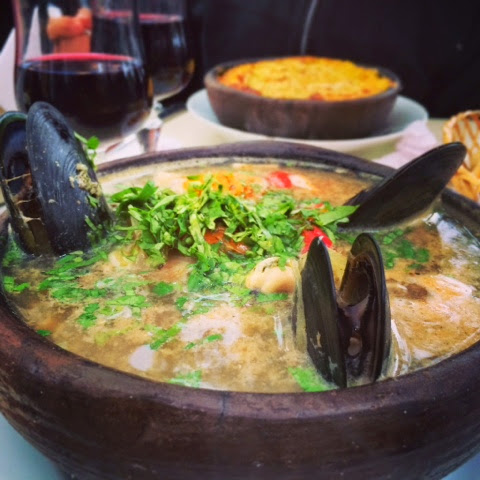 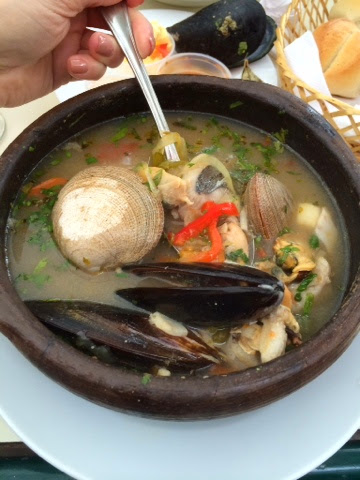 Posted by JackOfAllTravels at 12:24 PM No comments:

Coffee, Tea, or Me? Meet the Coffee Culture of Santiago, Chile

I may have chosen this destination the same day I ventured out. Realistically, the destination chose me, doesn't it always? Anyway, I didn't have adequate time to do research beyond the essentials (i.e. Do I need a visa? Are hotels affordable?) so once again I am winging it. I did, however, watch a couple of YouTube clips on my favorite travel guru Anthony Bourdain.  He spent some time in Santiago, Chile. I saw a clip of him eating enormous avocado pork sandwiches, drinking local beer, and joining in on cultural events like having cafe con piernas served to him by a leggy lady dressed in a Vegas-style cocktail waitress uniform.
Upon arriving in Santiago, we realize we are in the exact same time zone as New York. Bonus!  We also realize it's the end of autumn and winter is around the corner. It's kind of gray out but still pretty mild. We stayed at Loreto Hotel downtown for $100/night. Free wifi, free breakfast, and a charming balcony included! We ventured out for coffee -- actually, cafe con piernas or 'coffee with legs'. 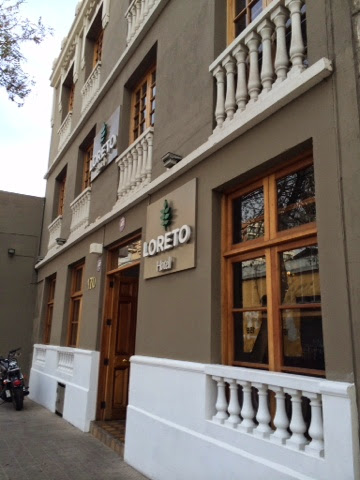 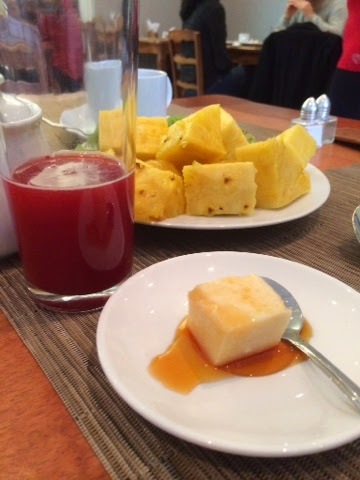 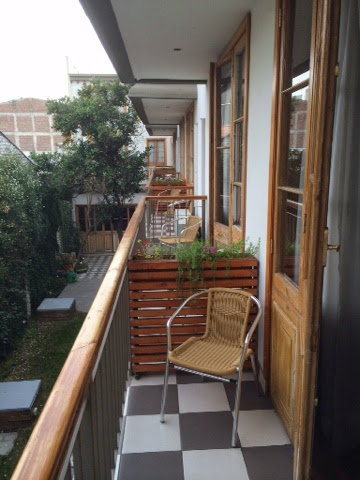 We made three stops. First, a coffee and croissant with avocado at Caffe de Lucia. We quickly found out that avocado is an essential part of the Chilean diet, and there's no portion control. No complaints from me. 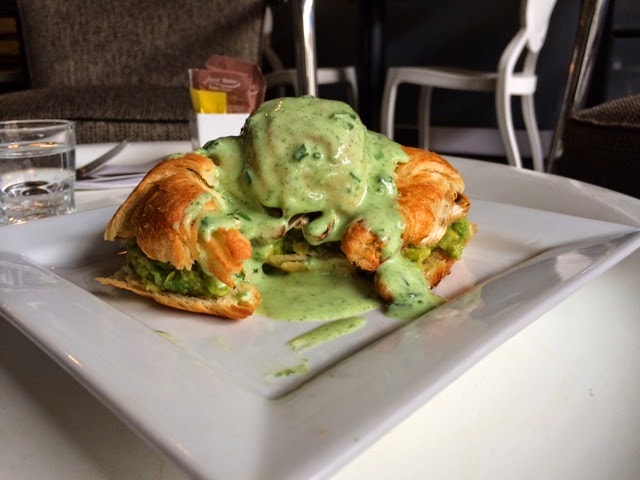 The next two stops are at Cafe Haiti and Cafe Caribe, both located downtown on Calle Huerfanos. At Cafe Haiti, tables surround a stage type of platform with railings for waitresses to strut down with your cappuccino in hand. At Cafe Caribe, it's standing only. Both equally exploit women in rump-hugging minidresses and heels for your enjoyment with your morning coffee. The skin bearing waitresses have fun with it though, flirting with the regulars, who generally seem like harmless old men. It is undoubtedly a dated tradition that got the locals into coffee drinking. So will the inevitable world domination of Starbucks on the coffee industry ruin this uniquely creepy tradition in Santiago? I sure hope not. 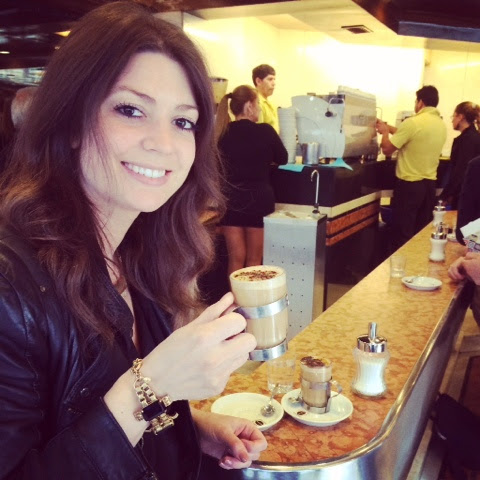 Posted by JackOfAllTravels at 9:14 AM No comments: