We sat at a table outside, and judging by the puddle of sweat I produced when my cheeks met the pleather chair, it was just too hot for fondue. Instead, we tried a few other plates that we heard are like, totally Swizzy.

Cheese, ham slices, and pickles (you will find, as we did, this is a theme) over a salad with some kind of creamy dressing was our first dish. A lot of cheese. Their cheese is not to be messed with. You can smell it coming.

Up next was the rösti, shredded potatoes fried in nugget-form and stuffed with cheese (surprised?) served over a salad with creamy dressing. It was like McDonald's breakfast hash browns, the gourmet edition, stuffed with cheese. Yum. Nothing makes more sense to me than fried carbs over a bed of lettuce.

We finished the meal with a meaty plate. A skewer of pig, if you will? Bratwurst, bacon, and pork on a stick with gravy to be exact. It was complimented by home fries. The whole production was washed down with a Swiss beer, Eichhof. 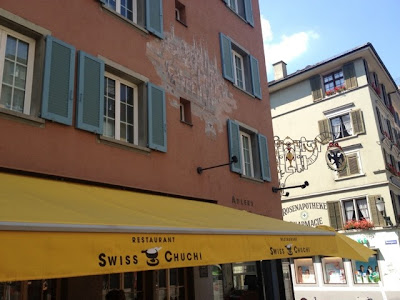 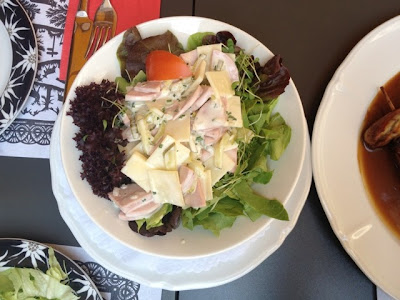 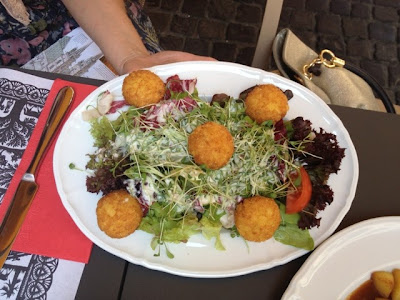 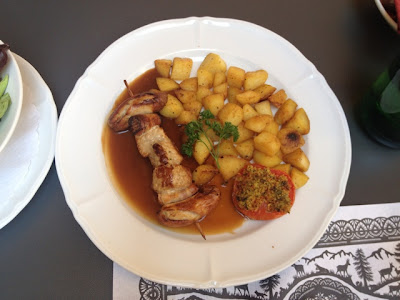 Posted by JackOfAllTravels at 1:14 PM