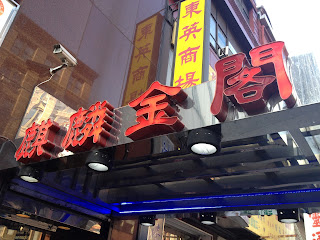 Not only was it my first traditional Chinese wedding, it was my first real Chinatown experience. I never really venture down to Chinatown, though I fully intend on now making a habit of it. The Golden Unicorn on Broadway was the venue for the reception. We arrived promptly at 6:30 with excitement and anticipation. The food to come would be new and unfamiliar to me. First, I tried raw clam. Surprisingly enough for a new seafood eater like myself, it was pretty good. It had the texture of pickled ginger.
All the food is served family style on large platters in the center of each table. We were presented a seafood platter with Dungeness crab legs, seaweed salad, fried fish, and jellyfish! The jellyfish looked like thin squiggly glass noodles, and tasted salty with a crunch. Then I tried cooked scallops with seaweed and cabbage. Next up was shark fin soup, a luxury dish symbolizing respect and honor that is served at special events. Although there is controversy about the welfare of sharks, this is a popular dish for the wealthy because of the rarity, flavor, texture, and meticulous preparation involved. We also tried quail, steamed fish, noodles, and a sweet rice dessert.

During the celebration, we launched confetti at the bridal party through long tube shaped poppers. We drank Heineken and admired each outfit change that the newly weds revealed. By the end of the night I had confetti in every crevice of my hair and dress. But I can say I fully enjoyed the traditional cuisine, the hot pink and purple venue décor, and all the festivities.

Posted by JackOfAllTravels at 7:19 AM