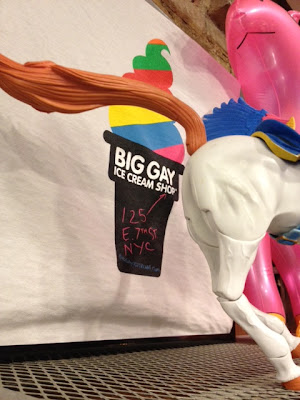 This is not your childhood ice cream shop. They add an eccentric touch to traditional ice cream creations. Their specialty, The Salty Pimp, is very simple: vanilla ice cream, dulce de leche, sea salt, chocolate dipped. The other treat I tasted was the Cococone: vanilla ice cream with toasted curried coconut. Both were outstanding, but I especially have a soft spot for The Salty Pimp. The publicity from being on various food and travel shows certainly is helping, as the line was out the door at 9PM on a Thursday in April. The décor was all rainbows and unicorns just as I had hoped. Once May rolls around, keep an eye out for the Big Gay Ice Cream Truck roaming the streets of NYC. There are too many wild flavors and toppings such as olive oil, bacon marmalade, and cayenne pepper, to only stop here once.

Posted by JackOfAllTravels at 6:27 PM