Today I checked into the newly renovated executive queen suite at the MGM Grand Hotel & Casino in Las Vegas. 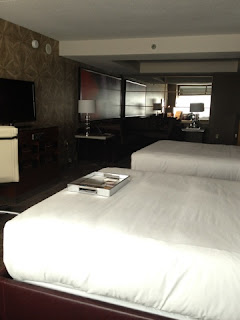 The room is almost 700 square feet and decorated in subtle shades of purple. At first glance I know I will be a happy camper. Personally, I didn't think the rooms at MGM needed renovating at all. But I like that MGM took initiative and got started with modernizing the rooms before they become outdated looking like some 1990's motel.

Somehow my room came with a $65 food and beverage credit thanks to a Facebook promotion. That credit was used immediately on an extensive lunch at MGM's Wolfgang Puck. The tuna tartare was delicious, and so were the blue cheese truffle chips. You can't go wrong with a Wolfgang burger, either. To conclude our meal, we ordered two slices of pie, which the staff personalized on a plate with a variety or sorbets and ice cream.

I have only two minor complaints so far. First, where is the iPod docking station?! I am spoiled now, and I totally expect to blast my playlist through mini speakers while charging my phone on the nightstand. However, I'll get over it! My other concern while staying in hotel rooms, is the cleanliness. This room is impeccably clean, except for the tv remote. Everyone knows how germy the remote can be, because it sometimes gets overlooked in the housekeeping process (or so I hear). Well, mine has a piece of some kind of crusty goop on it, and I'm a avoiding it like the plague! But like I said, those are minuscule problems and so far I am having quite a good time.

More to come on my Vegas experience. I can't promise my future reports will be from a sober Jack...

Posted by JackOfAllTravels at 4:06 PM

Email ThisBlogThis!Share to TwitterShare to FacebookShare to Pinterest
Labels: MGM lobby with a live tweet feed behind me. Look for JackOfAllTravels ;)